REMINDER: Set your clocks BACK one hour tonight! 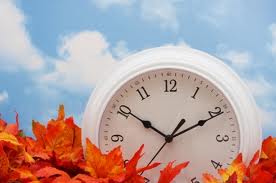 For most Americans the time change means shorter days and less daylight in the evening after returning home from work. But for those who live in the states of Arizona and Hawaii, the fall back from daylight savings will go unnoticed, as these states do not participate in the time change.

At this time of year, and in March at the start of DST when we ‘spring ahead’ one hour, many ask why we use daylight saving time and where it came from. In a story last week (http://newstaar.com/2011-day-light-savings-time-end-date-approaching-%e2%80%93-how-and-why-did-it-begin/354473/), we looked into the question and here is what we found.

Some have traced the concept back to Ben Franklin who once wrote of how much would be gained by taking advantage of the longer days offered by the summer sun. Getting more done during daylight hours, literally saved one from ‘burning the midnight oil.’

To save resources during World War II, the time change became mandatory, and infact, from 1942 to 1945 the time change was in effect year round. The mandate was repealed at the end of the war.

Related Articles
Business CNN Poll: Idaho is Ranked the Friendliest State for Small Business We always knew it to be true, but the rest of the world finally got a clue last week! Idaho is a terrific place to start a small business. This article (top right) is “clipped” from the front page of the Wednesday May 9 2012 edition of the Coeur d’Alene Press. Read more about the […]
Just for Fun Expensive Real Estate Listings in the USA: Homes with Sports Facilities Think OUR Real Estate market is pricey? Check out this Forbes.com article, featuring Luxury properties with Sports Facilities! Indoor Basketball Court, Summerlin, Nevada – John Giuffo – Forbes.
Market Value USA Today: Housing Outlook is More Upbeat We thought you would want to see this article… more encouraging news about the U.S. Housing Market! You can get the pdf version on our website: www.RealEstate-Browser.com/MarketNews Housing outlook is more upbeat   By Julie Schmit, USA TODAY Updated 1/16/2012 2:12 PM     Optimism is building that the housing industry is nearing a bottom […]