We thought you would want to see this article… more encouraging news about the U.S. Housing Market! You can get the pdf version on our website: www.RealEstate-Browser.com/MarketNews

Optimism is building that the housing industry is nearing a bottom — finally. 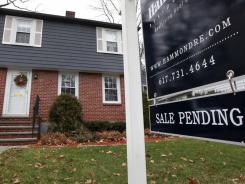 A home in Brookline, Mass.

Home sales and home building are forecast to rise this year after sliding steeply the past five years in housing’s worst downturn since the Great Depression.

Recovery is expected to be slow, and home prices are widely expected to fall this year. But investors are betting on the start of an upturn, bidding up home builder stocks and causing them to outperform the broader stock market.

Chief executives are more positive. JPMorgan Chase’s Jamie Dimon said last week that housing is near its bottom but could stay there a year. Stuart Miller, CEO of home builder Lennar, said the market has started to stabilize because of low prices and record-low interest rates.

Market researcher RBC Capital Markets has also turned from a “bearish” view on housing to saying that 2012 “will mark a step in the right direction.”

Many economists expect home prices to fall more this year because of foreclosures and other properties sold at very low prices.

As foreclosures pick up this year, “prices will drop,” says Stan Humphries, Zillow chief economist. He says home prices won’t bottom until later in 2012 or next year.

On average, prices have fallen by about a third since 2006.

“This year will feel a lot better to builders, investors and real estate agents than to consumers,” says Jed Kolko, economist for real estate website Trulia.

While an economic shock could derail progress, “there’s now more evidence of improvement in the economy, and housing will follow the economy,” says David Crowe, chief economist at the National Association of Home Builders. More improvement is expected for:

•Sales. Existing home sales will rise 12% this year after a 2% increase last year, and new home sales, coming off a horrid year, will jump 74% this year, Moody’s Analytics predicts.

For more information about reprints & permissions, visit our FAQ’s. To report corrections and clarifications, contact Standards Editor Brent Jones. For publication consideration in the newspaper, send comments to letters@usatoday.com. Include name, phone number, city and state for verification. To view our corrections, go to corrections.usatoday.com.

Related Articles
Market News North Idaho Real Estate Market News: Residential Statistics January – April 2012 [scribd id=95316467 key=key-n2n5dgurqpz2fbob0gy mode=list] &nbsp;   Originally Posted at: http://www.realestate-browser.com/2012/05/30/north-idaho-real-estate-market-news-residential-statistics-january-april-2012/
Market News North Idaho Real Estate Market: You May Be Interested to Know… We thought you’d like to know a few facts about our ever-changing (improving!) Real Estate Market in North Idaho: •Pending Homes sales are the highest they have been since they were impacted by the Home Buyers’ Credit back in April of 2010. •We are WAY AHEAD of the National Average in Annual Appreciation if you […]
Market News NAR: Positive Signs Abound for Housing The first quarter of 2012 was the best first quarter for real estate in five years, and pending contracts suggest that the second quarter of 2012 will be the best second quarter in five years, NAR Chief Economist Lawrence Yun said this morning at the Residential Economic Update during the NAR Midyear Legislative Meetings & […]